We offer turn-key solutions to our clients and ensure the highest levels of proficiency and expertise in the projects we undertake.

Language is one of the most complex and important tools of International Trade. As in any complex and sophisticated business, small changes in wording can have a major impact on all aspects of a business agreement. Word definitions often differ from industry to industry. This is especially true of global trade. Where such fundamental phrases as "delivery" can have a far different meaning in the business than in the rest of the world.

For business terminology to be effective, phrases must mean the same thing throughout the industry. That is why the International Chamber of Commerce created "INCOTERMS" in 1936. INCOTERMS are designed to create a bridge between different members of the industry by acting as a uniform language they can use. Each INCOTERM refers to a type of agreement for the purchase and shipping of goods internationally.

There are 13 different terms, each of which helps users deal with different situations involving the movement of goods. For example, the term FCA is often used with shipments involving Ro/Ro or container transport; DDU assists with situations found in intermodal or courier service-based shipments. 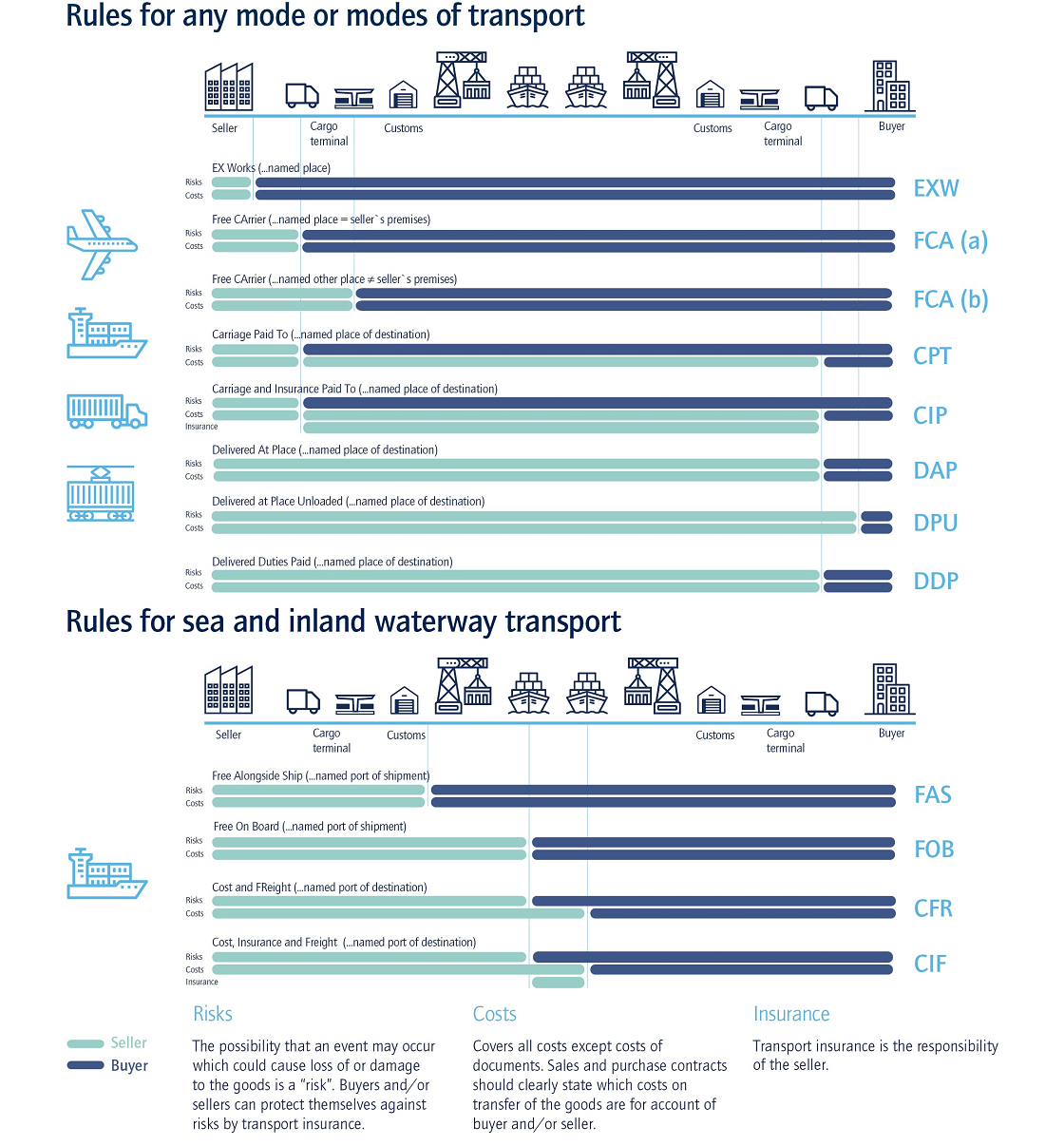 RULES FOR ANY MODE OF TRANSPORT :

EXW Ex Works (named place of delivery) - Often used when making an initial quotation for the sale of goods without any costs included, EXW means that the seller makes the goods available at their premises or at another named place (works, factory, warehouse etc). The seller does not need to load the goods on any collecting vehicle, nor does it need to clear the goods for export.

CIP Carriage and Insurance Paid to (named place of destination) - Similar to CPT with the exception that the seller is required to obtain minimum insurance for the goods while in transit. .

DPU Delivered at Place Unloaded (named place of destination) - This Incoterm requires that the seller delivers the goods, unloaded, at the named place. The seller covers all the costs of transport (export fees, carriage, unloading from main carrier at destination port and destination port charges) and assumes all risk until arrival at the destination place.

CIF – Cost, Insurance and Freight
The same as CFR with the addition that the seller must also obtain minimum insurance cover against the buyer’s risk of loss of or damage to the goods during the carriage

SSG combines its services with the customer requirements to custom design specific solutions for its clients. Once you find Sabelatrans, you stop looking !

SSG offers professional dedicated team of brokers to assist and advise clients in an efforts to cover tonnage and cargo requirements in the best possible way.

As a Project freight forwarder in UAE, SSG ensures that your heavy lift , break bulk and over dimensional cargoes receive the care they demand. OUR services are personalized to suit your objectives of pre-planning, loading, and discharging your cargo.

We provide a comprehensive and quality service for direct client with respect to the purchase and selling of: General Cargo Vessels Containers, RoRo Vessels, Tankers, Tugs & Barges etc...